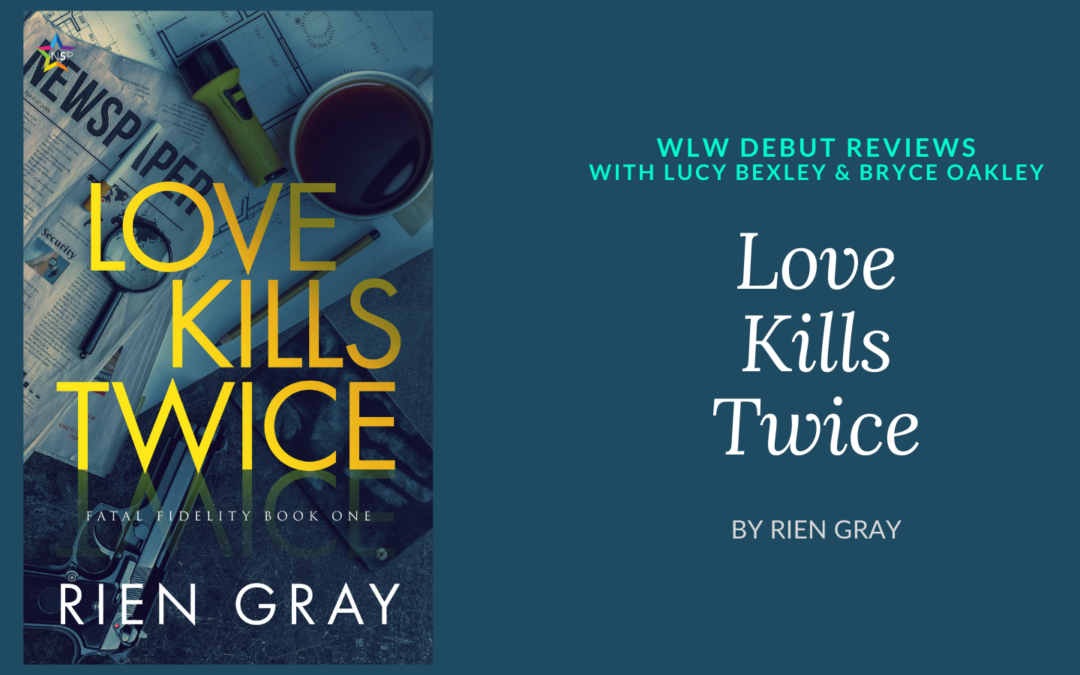 Welcome to WLW Debut Reviews with Lucy & Bryce! One thing that stood out about 2020 was how the lesfic community shows up for each other! To give back some of the incredible support, we are reading, reviewing, and promoting one debut WLW book each month!

Love Kills Twice was published on January 18, 2021. You can buy it on Amazon right here.

Love Kills Twice is a debut novella by Rien Gray featuring an assassin who is hired by both a wife and husband to kill one another.

Lucy: I just want to shout sexy assassin from the rooftops! This book fulfilled a lot of my Killing Eve fantasies.

Bryce: I was thinking the same thing! Killing Eve vibes all the way around in the best way. If Villanelle was a hot, perfectly coiffed nonbinary babe.

Lucy: It was so refreshing to see a nonbinary love interest/main character in Campbell! And the portrayal was layered and complicated and very sexy, IMO.

Bryce: Absolutely loved reading about a nonbinary character from a nonbinary writer. I also loved how balanced their identity was on the page and that the other MC, Justine, just totally accepted it without question. That is the vibe I’m going for in my life: Accepting someone else’s pronouns and identity, no questions asked. Also, the sex scenes in this book were really hot, right? That second one nearly melted my Kindle.

Lucy: The sex scenes were SO HOT. I also loved that in this book the mystery isn’t if or why but how.

Lucy: Ok, fair. I was waiting for more to go wrong. The husband felt a little like a strawman, but I think it works in the story, especially because it was a novella.

Bryce: It was easy to hate him!

Lucy: Not much room for nuance of the side characters, but what was there was done well! I’d love to see a spinoff with Campbell’s lawyer.

Bryce: She definitely stole every scene she was in. I would have loved for Justine to have a secondary character friend, but hey, it’s a series, so she has time.

Lucy: I had a lot of fun imagining how Campbell would be in day-to-day life. They’re so meticulous and organized. I bet they’re really good at folding fitted sheets and organizing grocery lists by sections of the store.

Bryce: Something about their level of control was so fascinating to me. I loved seeing them on the page being a not-assassin, but just a real live person. Even if they still seemed pretty otherworldly in those scenes.

Lucy: The writing was beautiful, too. I had so many highlights, but here’s a favorite: “The question slices deep until there’s nothing left but the bare bones of honesty.”

Bryce: My highlights include: “I deal in paintings, but Campbell is more of a classic statue: sculpted jaw, full mouth, and cheekbones that could blunt a chisel.”

Lucy: “No woman’s accused me of ever giving her too little.”

Bryce: “Campbell’s expression is open but empty, like a door leading to an elevator shaft.”

Bryce: “Commitment is for people with less blood on their hands.” There were so many clever lines throughout. And one thing I really admired about the writing was the specificity of voice between the two MCs in the different POVs.

Lucy: Speaking of POVs, one thing this book did that really worked is it changed POV mid-sex scene. It was nice to get the experience from both characters. And I loved the way Gray had Campbell set boundaries in regards to their body during sex. It was really well done.

Bryce: I loved that POV switch! It was seamless. Also like, having sex with an assassin seems like maybe not the best idea and one that I’d normally roll my eyes at if an MC tried it, but I was absolutely rooting for them. Their chemistry was spot on.

Bryce: Can you imagine the browser history for this research? Real talk though, I think we’d be very bad assassins if this is anything to go by.

In conclusion: It’s safe to say that we’re definitely going to continue reading this series because we both love the chemistry of the main couple. The writing is tight and clever and left us wanting more. Love Kills Twice is the first novella in the Fatal Fidelity series, and features a snippet of Book Two at the end! You can buy it on Amazon here and from NineStar Press here.

If you have a debut coming out, let us know using this form: https://tinyurl.com/ydebkyy8