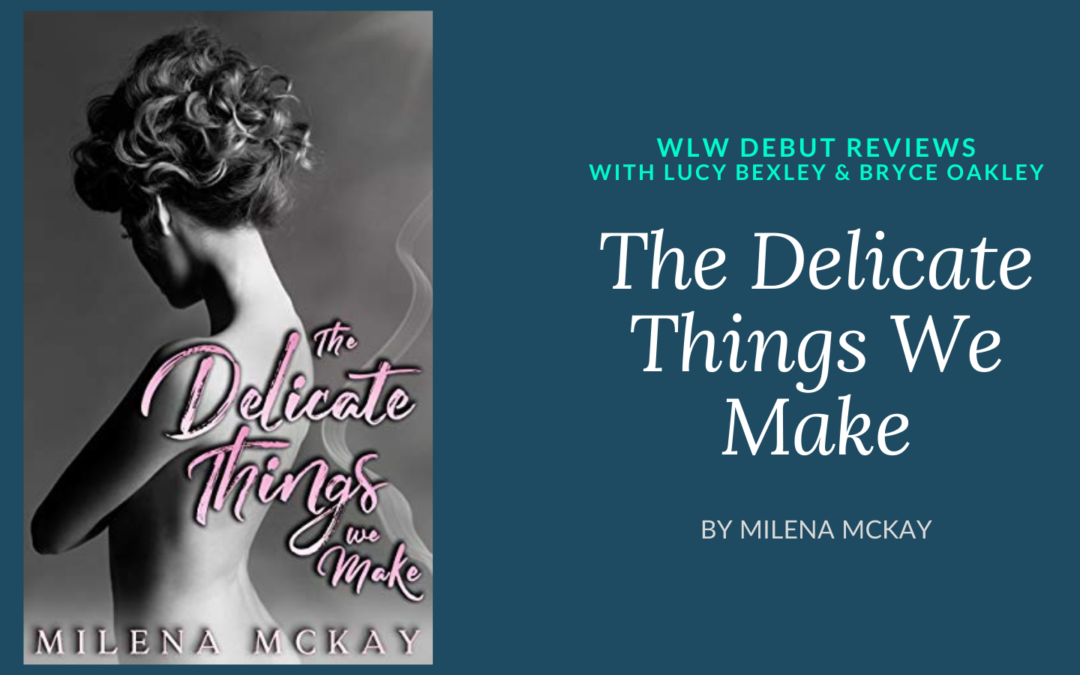 Welcome to WLW Debut Reviews with Lucy & Bryce! One thing that stood out about 2020 was how the lesfic community shows up for each other! To give back some of the incredible support, we are reading, reviewing, and promoting one debut WLW book each month!

The Delicate Things We Make by Milena McKay was published on January 19, 2021. You can buy it on Amazon right here.

Lucy: I don’t think it’s a spoiler to say how much we love Milena! I’m thrilled to see her debut novel doing so well and getting so much attention. I think it’s a testament to how supportive the lesfic and queer romance communities are.

Bryce: I absolutely love following someone on Twitter and getting to know them and adore them and then they come out with a BOOK and it’s GOOD. I think one thing the lesfic/wlw fiction community does well, especially on Twitter, is to support one another! And Milena has always been so supportive of everyone, so it’s been a real joy to support her debut!

Lucy: I agree! Milena is one of the kindest people on Twitter and she’s always the first to support others and lift them up. Her book is so intricately layered, not that I’m surprised, but it is a total delight. I’m always so proud of people for writing and publishing. I think we both know how nerve-wracking it can be, especially with the first book.

Bryce: 100%. Okay, I think we’d be remiss if we didn’t talk about how we both love fanfiction and this book began as fanfic. It was a major part of my formative writing years—I started roleplaying Harry Potter in AOL chat rooms when I was 12, so like, fanfiction went hand-in-hand with that (in the glory days of fanfiction.net, no less) and taught me so much about writing for fun and for an audience and getting near-instantaneous feedback. Fanfic writers do not get enough credit for how hard it is!

Lucy: I came to fanfiction later but I also love it! I wish we’d known each other when we were 12 so you could have told me about it.

Lucy: I think I read my first fanfic in my late 20s? But writing fanfic was such a rewarding experience! It taught me discipline re: writing on some sort of schedule. It also taught me that writing is a community and a big part of writing is reading and telling people nice things about their writing.

Bryce: Oh, for sure. Um, we need to talk about one of the characters in this book, though. There’s a certain fortune-teller who always gives fantastic advice that really reminded me of someone…

Lucy: Hmm, interesting. Did she have amazing jokes? I was so honored that Milena put a Lucy character in this book (and also in the original fic). She also let me write some truly bad circus jokes. As you know, writing terrible jokes is a true passion of mine. I also love that the Luce character is lovable but a little bit of a scoundrel. Am I using that word right?

Lucy: She’s incorrigible, which I aspire to.

Bryce: Babe, I think you’re there. Okay, also The Delicate Things We Make features one of my favorite tropes: Ice Queens! I live for an Ice Queen melt. And Milena does it better than almost anyone I’ve read lately. Loved this aspect of the book.

Lucy: Personally, I love a character who is a bit of a mess, and that first intro to Jamie is just *chef’s kiss*. And I love a good comeback story—I think this book is so satisfying in that way. It balances heavy topics with a lot of beauty and hope.

Bryce: I was struck by even the first few paragraphs how detailed the writing was. Each sentence has so many layers! It’s truly impressive for a debut novel to have such a tight grasp on painting such vivid images.

Lucy: I know one thing we talked about is how much we love New York City, where this book is set. The Delicate Things We Make does a really good job of capturing the New York wealthy art world vibe. It made me miss museums and galleries so much! Oh and coffee shops. And the circus, actually. Am I just tired of my apartment? Hard to say! But this book was a very nice escape.

Bryce: Hilarious that you think either one of us knows anything about the New York wealthy art world, but you’re right, this book nails that feeling! I really miss museums in NYC and how big the city feels but also how physically small it is. Milena did an incredible job with the setting.

Lucy: My mother-in-law went to art school in NYC and showed her work in galleries there until she moved a few years ago. So it’s by proxy, I guess. Anyway! I know Em (@onewritergirl) worked on the cover and other art for this book, all of which has been stunning.

Bryce: She totally captured it. It’s simple and classic and sexy. Switching gears, let’s talk about how the entire investigative premise for the book is incredible.

Lucy: You and I are both amateur sleuths.

Bryce: We have been known to do some FBI-level internet stalking, yes.

Lucy: We love going full True Detective on a random conspiracy one of us floats. I loved the investigative angle of this book. The two leads come together under false pretenses and they have to overcome that plus past trauma to find vindication and an HEA. It was absolutely as satisfying as every case we’ve cracked.

Bryce: Which is a LOT of cases, just saying. But you’re totally right, that’s a great descriptor for this book. It was SO satisfying. Some books feel super abrupt or I’m wondering about a random loose thread as I read it, but I finished this book feeling fulfilled. I wanted drama, love, intimacy, and mystery, and it delivered.

In conclusion: This was a great debut novel — if you love The Devil Wears Prada, Ice Queens, Journalism, and vivid writing, The Delicate Things We Make is for you! Milena’s second book The Perfect Match came out earlier this month (February 2021)!

Final note: We would add some content warnings on this one. The dedication is “For the survivors” and it’s important to know this book tackles the #metoo movement. We know there can be a fine line between content warnings and spoilers, so hopefully that’s the right amount to say without giving things away.

If you have a debut coming out, let us know on this form: https://tinyurl.com/ydebkyy8